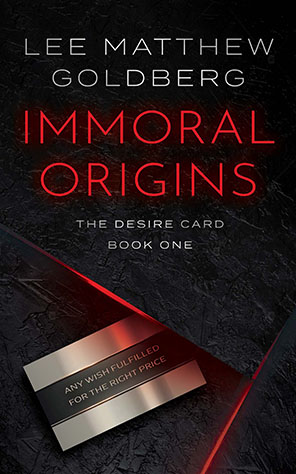 It’s 1978 in New York City, and disco is prominent. As are mobsters, gritty streets, needle parks and graffiti-stained subways.

Jake Barnum lives in Hell’s Kitchen. He’s a petty thief selling hot coats with his buddy Maggs to make ends meet and help his sick kid brother. At a Halloween party downtown, he meets a woman with a Marilyn Monroe mask who works for an organization called The Desire Card—an underground operation promising its exclusive clients “Any Wish Fulfilled for the Right Price.”

As Jake becomes taken with its leader, a pseudo father and sociopath at heart, he starts stealing from the rich and giving to the poor. In other words…himself. But as he dives deeper in with the Card, begins falling love with Marilyn, and sees the money rolling in, clients’ wishes start becoming more and more suspect—some leading to murder.

The first book in the Desire Card series, Immoral Origins follows those indebted to this sinister organization—where the ultimate price is the cost of one’s soul. 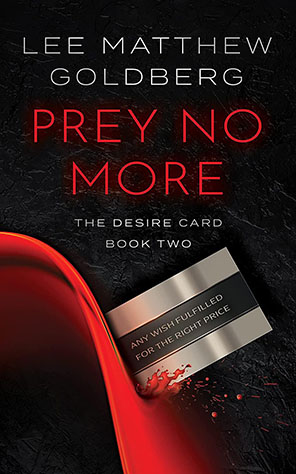 J.D. Storm is an ex-Army sniper, discharged after losing an eye in battle. Finally finding work at the illusive Desire Card—an unsavory organization that promises “any wish fulfilled for the right price”—he heaves a sigh of relief. But when those wishes become too immoral, J.D. quickly finds out that no one reneges on the boss, a powerful and eccentric madman known only as Clark Gable because of the realistic mask he wears, without paying a hefty price.

On the run, J.D. begins a white-knuckle cat-and-mouse chase that takes him northwest where he hides out with a former girlfriend and tries to scrounge up enough cash to flee the country. But with every second that passes by, Gable’s other masked operatives are closing in.

Soon, J.D. discovers just how widespread the organization’s contacts are—no longer knowing who he can trust. Rather than running, J.D. decides that his best shot is to take out the head of the snake. After all, the hunted must become the hunter if he has any hope of surviving.

Ingeniously plotted and filled with twists and turns, Prey No More follows those indebted to this sinister organization—where the ultimate price is the cost of one’s soul.

“Part international thriller, part down and dirty heist tale, Prey No More is a lightning-fast novel about human desire and the survival instinct.” – Scott Adlerberg, author of Graveyard Love and Jack Waters 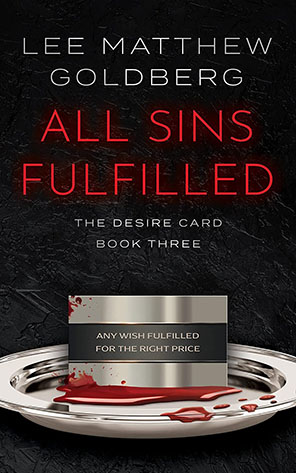 Any wish fulfilled for the right price. That’s the promise the organization behind The Desire Card gives to its elite clients. But sometimes the price is more menacing than anyone ever imagined.

Harrison Stockton has lived an adult life of privilege and excess. A high-powered job on Wall Street fuels his fondness for alcohol and pills at the expense of a family he has no time for. Quite suddenly, all of his luxuries come to a crashing halt when he loses his job and—at the same time—discovers he has just months left to live.

Desperate, and with seemingly nowhere else left to turn, Harrison activates his Desire Card. What follows is a gritty and gripping quest that takes him from New York City to the slums of Mumbai, where he’s forced to take chances and make decisions he hoped to never face. And when his moral descent threatens his wife and children, Harrison must decide whether to save himself at any cost…or do what’s right and break his bargain with The Desire Card.

A taut and fast-paced thriller, All Sins Fulfilled follows those indebted to this sinister organization—where the ultimate price is the cost of one’s soul.

“An atmospheric riveting thriller you won’t be able to put down or easily forget. One of Goldberg’s best.” – Terrence McCauley – Award-winning author of The Wandering Man and The Moscow Protocol 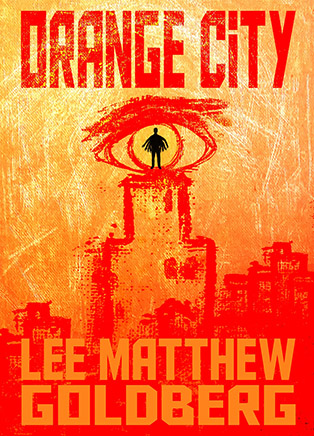 Imagine a secret, hidden city that gives a second chance at life for those selected to come: felons, deformed outcasts, those on the fringe of the Outside World. Everyone gets a job, a place to live; but you are bound to the city forever. You can never leave.

Its citizens are ruled by a monstrous figure called the “Man” who resembles a giant demented spider from the lifelike robotic limbs attached to his body. Everyone follows the man blindly, working hard to make their Promised Land stronger, too scared to defy him and be discarded to the Empty Zones.

After ten years as an advertising executive, Graham Weatherend receives an order to test a new client, Pow! Sodas. After one sip of the orange flavor, he becomes addicted, the sodas causing wild mood swings that finally wake him up to the prison he calls reality.

A dynamic mash-up of 1984 meets LOST, ORANGE CITY is a lurid, dystopian first book in a series that will continue with the explosive sequel LEMONWORLD.

“A unique dystopian thriller that manages to reveal our greatest fears about emerging technology and our anxieties at what the future holds.” – Raymond A. Villareal, author of A People’s History of the Vampire Uprising 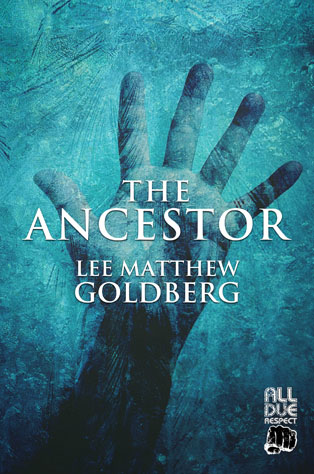 A man wakes up in present-day Alaskan wilderness with no idea who he is, nothing on him save an empty journal with the date 1898 and a mirror. He sees another man hunting nearby, astounded that they look exactly alike except for his own beard. After following this other man home, he witnesses a wife and child that brings forth a rush of memories of his own wife and child, except he’s certain they do not exist in modern times—but from his life in the late 1800s.

After recalling his name is Wyatt, he worms his way into his doppelganger Travis Barlow’s life. Memories become unearthed the more time he spends, making him believe that he’d been frozen after coming to Alaska during the Gold Rush and that Travis is his great-great grandson. Wyatt is certain gold still exists in the area and finding it with Travis will ingratiate himself to the family, especially with Travis’s wife Callie, once Wyatt falls in love. This turns into a dangerous obsession affecting the Barlows and everyone in their small town, since Wyatt can’t be tamed…

“A distinctive mélange of the sincere and the strange.” – Kirkus Reviews

“From the icy opening battle (…) you feel yourself in the hands of a master storyteller.” – SJ Rozan, bestselling author of Paper Son

“A thrilling page-turner with an ache in its heart.” – Roz Nay, bestselling author of Our Little Secret and Hurry Home

Amazon
Down & Out Books 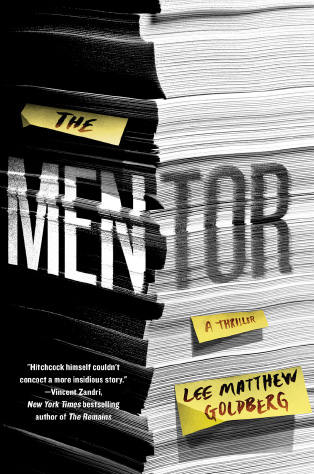 Kyle Broder has achieved his lifelong dream and is an editor at a major publishing house.

When Kyle is contacted by his favorite college professor, William Lansing, Kyle couldn’t be happier. Kyle has his mentor over for dinner to catch up and introduce him to his girlfriend, Jamie, and the three have a great time. When William mentions that he’s been writing a novel, Kyle is overjoyed. He would love to read the opus his mentor has toiled over.

Until the novel turns out to be not only horribly written, but the most depraved story Kyle has read.

“The Mentor succeeds as sharp and bitter satire.” – Kirkus Reviews 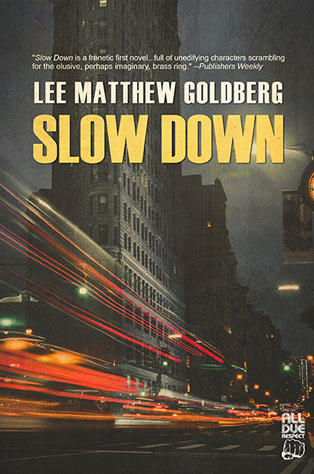 How far would you go to make your dreams come true? For budding writer and filmmaker Noah Spaeth, being a Production Assistant in director Dominick Bambach’s new avant-garde film isn’t enough.

Neither is watching Dominick have an affair with the lead actress, the gorgeous but troubled Nevie Wyeth. For Noah’s dream is to get both the film and Nevie in the end, whatever the cost.

And this obsession may soon become a reality once Dominick’s spurned wife Isadora reveals her femme fatale nature with a seductive plot to get rid of her husband for good.

“A mad man’s tour of Manhattan’s vices, follies, and ultimate betrayals.” – Urban Waite, author of The Terror of Living and Sometimes the Wolf

“A brilliant rush of a work. Savor this book.” – Foreword Reviews

Amazon
Indiebound
Down & Out Books